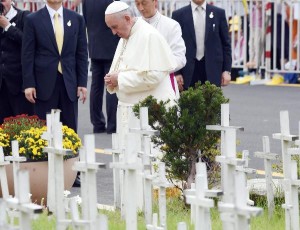 Pope Francisco criticized clerics who live ostentatiously and prayed for the unborn at the third day of his visit to South Korea, which began with a crowded Mass in Seoul.

The pontiff criticized the “hypocrisy of the dedicated men and women who profess vows of poverty, and yet live like the rich” in his meeting with 4,000 members of South Korean religious communities in Kkottongnae complex.

This attitude “harms the soul of the faithful and harms the Church,” Francisco said.

In Kkottongnae the pontiff also made ​​contact with several people with disabilities, as the resort caters to thousands of these.

In addition on the emblematic Gwanghwamun Square beatified 124 martyrs of the first generation of victims of religious persecution in Korea of the eighteenth and nineteenth centuries.