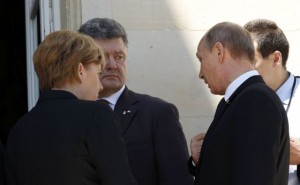 The President of Ukraine, Petro Poroshenko, announced this Wednesday that he will decree a “unilateral” ceasefire, for the southeastern regions of the country, where government troops are fighting the pro-Russian militias.

“The peace plan will begin with my order of unilateral ceasefire”, assured the Ukrainian president to reporters that collects the Ukraine news agency Interfax and cites France Presse.

The Ukrainian President, Petro Poroshenko, said on Wednesday he will order a “unilateral” ceasefire for the Southeast regions of the country, where government troops fight against pro-Russians .

This announcement happened after Poroshenko and Vladimir Putin held a last minute conversation this Tuesday that addressed measures for a possible ceasefire in eastern Ukraine, according to the spokesman of Ukranian the head of state, Sviatoslav Tsegolko.