Possible signs of the Malaysia Airlines black box are detected 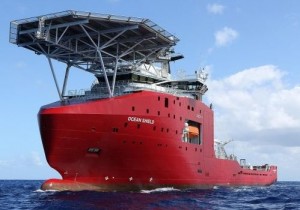 The Australian vessel Ocean Shield has detected new underwater acoustic signals in the southern Indian Ocean, 1,680 kilometers northwest of the Australian city of Perth, which could come from the black box of the disappeared plane of Malaysia Airlines.

This was reported this Monday by Angus Houston, Director of the Joint Coordinating Agency, a body established by Australia to coordinate the search of the device.

Houston has said that it is `the most promising lead´ achieved until now to locate the black box of flight MH370 since this disappeared from civil radars over a month ago.

The signals shows that the international fleet of ships and aircraft who participate in search operations seem to be `very close to where they need to be,´ according to the retired Air Marshal.

The new record of sound pulses have occurred after 30 days, which is nominally the time that the batteries last and allow the black box to emit location signals, although the manufacturers claim that batteries can operate 10 additional days.