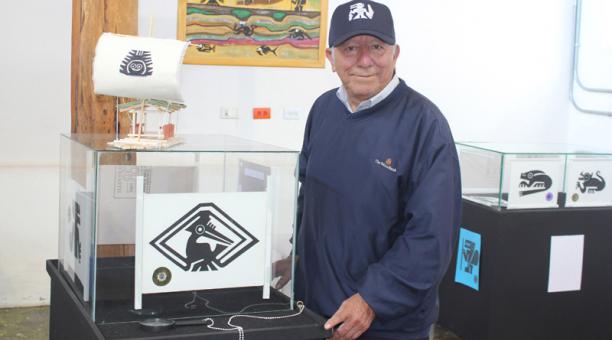 The taste for pre-Columbian figures has marked the life of Vicente Ayala. He has dedicated 50 of his 79 years to collecting archaeological pieces. But this language teacher was more captivated by the accounts of the Manteña-Huancavilca culture, which served as a counterweight to the transformation of wool into thread with the help of a wooden stick.

They were also possibly used as jewelery items. He still remembers that one day in the institution where he studied there was a group of teachers who disputed the tiny spheres.

There, Ayala acquired the first three strings of these pieces from the Manteña-Huancavilca culture. That was the beginning of a collection, which is now part of the Pre-Columbian Designs Room of the Imbabura Factory Cultural Complex, located in Antonio Ante.

The meeting with these articles, which he calls clay jewelry, was the beginning of a concern to unravel the technique of the inhabitants of this culture, who occupied a territory between Puná Island and Bahía de Caráquez, in the period between 500 and 1531.

Over the years he became a specialist. He explains that there are four kinds of fusayolas: the smooth ones, which have no message; the geometric ones that he considers as works of art.

There are also figures such as collectibles and the fourth are some representations of heads, in which those that even have teeth. The smallest sphere has seven millimeters. “Everything here is in miniature. It is the minimum expression in space. ”

In the cap, which covers his gray hair, he embroidered a mythological being that resembles a man, but that has wings and wears a mask. That was one of the first figurines that came to his hands.

However, the one that most appreciated is captured: two dragons, which makes him suppose that this culture had contact with those of Asia. María Sanmartín, wife of Ayala, supports him in this passion for pre-Columbian pieces. Now even her granddaughters, Carolina and Isabel Terán, help her classify the fusayolas. Likewise, his schoolmate, Raúl Pérez, current Minister of Culture, determined the ideal site for this room. (I)