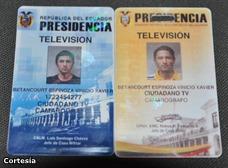 Ecuadorian Presidency will grant press credentials to the newspaper “El Universo”, because it published the “rectification” of a caption, announced today the Secretary of Communication, Fernando Alvarado.

“El Universo”, a media that criticizes the government of Rafael Correa, today reproduced a photo of the reporter’s credential Vinicio Betancourt with the caption: “AssemblymanGalo Lara showed the credentials that the presidency gave to Vinicio Betancourt.”

That caption, according to Alvarado, is a correction “veiled” of another disclosed in December last year by “El Universo” with which the Communications Secretary did notagree because, according to his point of view, it implied that Betancourt was employed by the Government. Lara said he was a victim of political persecution in which people with Presidency ID were involved, who also used an official vehicle.

In the press conference given today, Alvarado called the media “an arrogant giant that has been accustomed to subdue al the time and accustomed not to be told when it lies.”