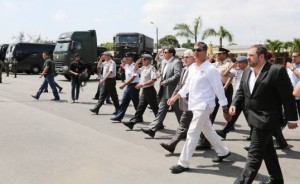 Yesterday, within the framework of the delivery ceremony of vehicles to the Army, President Rafael Correa announced he will send to the assembly the new draft Oil Coverage Act, which aims to “better protect officials who take technical decisions as acquiring an oil insurance that armors the country from falling world prices. Technically it is not necessary, it is redundant, but it serves to protect these officials against so many attacks.”

The president made an allusion to Mexico, a country that has this insurance, which has allowed it to keep the barrel price between $ 60 and $ 65, despite the fall in international oil prices. Correa also said in his speech that the state invested $ 81 million in 709 vehicle units for military use, manufactured by the Chinese company Poly Technology, which were funded with a loan from the Bank of China for 13 years and an interest rate of 3.9%.

In addition to the new units, Correa announced the modernization of 17 maintenance centers for these vehicles and a reservoir of spare parts for 5 years. These military vehicles will support surveillance tasks, combat smuggling, etc. The president also announced an investment of $ 109 million for the construction of housing for military personnel and a gradual reduction of troops until 2025; the aim is to decrease the number of members of the Armed Forces from 41,040 to 34,500.