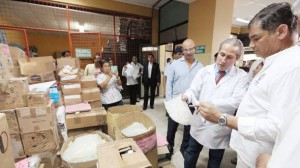 President Rafael Correa revisited on Tuesday, February 24 the Social Security Hospital Teodoro Maldonado Carbo, with the aim to assess the measures taken since the declaration of emergency of the medical center on last January 21.

Correa looked over so the urgent actions required to solve the problems presented by the hospital, have begun to be applied.

During the tour of the medicines cellars with the hospital director, Jonas Gonseth, he said that there have been a shortage, “but it´s not a shortage of financial resources, it´s a lack of control and that´s what we have done these 15 days. We have rescued up to $ 3 million in drugs that are not expired but have been under conditions because of that storage, these used to expire. We’re talking about drugs that have a high impact on patient´s health.”

At the same time, Correa said that there have been a lack of some medicines “but there are revolving funds for this, so the hospital can buy until the orders comein the normal way. It’s a very big management problem.”

Complementary works of mobile hospital in the IESS are still unfinished