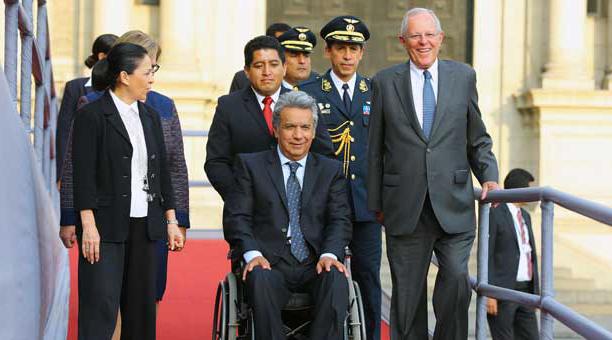 Lenin Moreno began his policy of international rapprochement with the governments of Colombia and Peru. He did it accompanied by Maria Fernanda Espinosa, current ambassador of Ecuador to the UN, in Geneva. She was in Lima yesterday, together with Foreign Minister Guillaume Long, during the ceremony of transfer of the Pro Tempore Presidency of the Andean Community of Nations (CAN). Long introduced her as his successor in office.

The meeting of the Andean Council of Ministers of Foreign Affairs in Lima coincided with the visit of Moreno to his future Peruvian counterpart, Pedro Pablo Kuczynski. Ecuador received the CAN Presidency during an event held on the morning of Tuesday, May 9, 2017. In the afternoon, Espinosa went with Moreno to the House of Pizarro, just as he did on Monday in Bogota, when the president-elect met with Colombian President Juan Manuel Santos in the House of Nariño.

The objective of this trip was “to reaffirm the interest of the Ecuadorian President on deepening relations.” This first international agenda of Moreno includes two readings. Andres Gonzalez, a professor and internationalist at the San Francisco de Quito University, sees this as a positive signal; A “very cautious, very logical” step, since starting with your neighbors is important.

He states that the key is outlining the foreign policy path of the next President and stresses the fact that Moreno has not decided his first approaches based on a political ideology since neither Santos nor Kuczynski are supporters of the trend that promotes the so-called Socialism of the 21st Century. “A president of suspicious ideologies would not have made such visits,” he warns