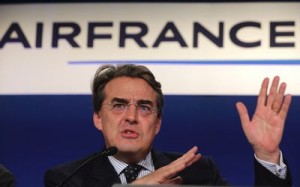 Alexandre de Juniac, President of the airline Company Air France / KLM, threatened to create a new company likeTransavia, if pilots refuse to sign an agreement with the management direction. This, after that the majority of the Air France pilots participated in a strike from 15 to 28 September, protesting against a project of low-cost subsidiary.

The President of the company said that if the pilots refuse to sign the management direction proposals, they “will create another Transavia Company, the Transavia Dévoleppement, in France, to carry out that activity with reduced costs withthe new aircraft, which will arrive in the coming months”.

For De Juniac, the low-cost market is “the only growth market” within the aviation sector. “In Europe, the low cost currentlyrepresents about 50% of air traffic,” he said.

Around 3000 metalworkers would be unemployed in Tierra del Fuego

With 700,000 customers, new Produbanco started operations in the country yesterday.