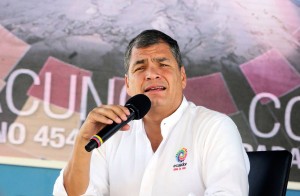 Until the end of January 2016, the government aims to pay the bills accumulated owed to contractors and suppliers of the state.

That was the commitment made by President Rafael Correa yesterday during his weekly address held in Latacunga (Cotopaxi), where he asked creditors for “patience” and assured that the economy of 2015 will close “creatively.”

He reiterated the government will pay the Christmas bonus to the public sector; $ 650 million of the Global bonds 2015; and a first payment to the Occidental oil company (OXY), that sued Ecuador by the expiration of a contract for exploitation in 2006.

With a smile, the head of state said he was “concerned” because the representatives of banks in the country are pleasing him, after a meeting he held with this sector, last Monday, to assess the status of the system:

“Very nice meeting, very courteous and respectful bankers … I am concerned, I´m starting to like bankers.”