President Santos receives coordinates to liberate detained by the FARC 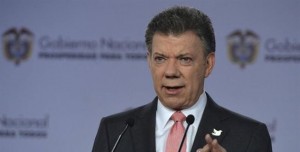 The President of Colombia, Juan Manuel Santos, said on his Twitter account that he has received the coordinates for the release of General Rubén Alzate and four other people recently taken by the FARC.

Santos also said he is giving instructions to facilitate the release that will be carried out next week.

Members of the Revolutionary Armed Forces of Colombia (FARC) captured on Sunday 16 Brigadier General Rubén Alzate, along with attorney Gloria Urrego and Army corporal Jorge Rodríguez, in a jungle area of ​​the department of Chocó (west).