Signs such as “banker”, “political son of Rafael Correa” and even “Andrés do not lie again” were those who starred the presidential candidates Guillermo Lasso, from the CREO-PSC alliance and Andrés Arauz, for the Union for Hope (UNES ), during the mandatory debate held this Sunday night. 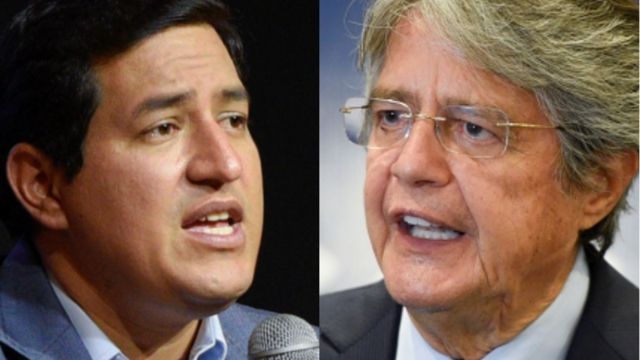 On the subject of economy and employment, Lasso asked Arauz: Which Andrés Arauz do we have tonight, the one who raised de-dollarization or the one who says in an electoral process that he wants to strengthen dollarization?

He asked this question after showing a publication by Arauz in the Dollarization Observatory where he mentioned the de-dollarization alternative.

To which Arauz replied: “ Did you read the article? , because he analyzes the statements of someone from his coalition in the Assembly. It is an analysis article that raised it, ”he said.

Following this, Arauz showed a dollar bill and said: “We will never allow the bankers to want to take us away. We are going to maintain dollarization. Bringing those dollars that are outside, you every chance you get dollars to your bank in Panama.

But, in the second block the confrontations increased between the applicants. And it was on the issue of health, vaccination, social security and child nutrition.

Arauz showed a sheet of the “vaccinated list” and said: “this week we have talked about vaccination and here is the list of those recently vaccinated and you see your mothers, aunts, grandmothers, you know what they have in common: they are friends from Mr. Lasso. They want to continue this exclusive health model ”.

Lasso replied in rhyme: “Andrés, don’t lie again” and mentioned that Lenín Moreno was the political son of Rafael Correa in 2017 and Arauz in 2021.

“They share the same political birth certificate as Correa, they are political brothers responsible for the last 14 years of government in Ecuador, ” he said.

On the issue of democracy and state institutions, Correa continued to be mentioned. And Lasso asked Arauz: “Look at what your boss, your political father said that the President of the Republic is not only the head of the executive branch, he is the head of the entire Ecuadorian State, clearly showing that this is a dictatorial phrase . Do you think about that Rafael, I say Andrés, sorry ”.

Laughing, Arauz replied that he even dreams of Correa and that he will pass this information on to him. Then, from this he deepened his proposal to eradicate gender violence.

In this same segment, the confrontation continued and in the counter reply, Lasso, assured that in the Rafael Correa government the woman was treated as a horrible chubby woman, assembly members of his own movement were censored for a matter of conscience, women were dragged out into the streets and declared: “this is your background on your political birth certificate, your father in law made all those mistakes Andrés, and you are in doubt as to how to act.”

In turn, Arauz, pointed out that candidate Lasso only talks about the past, when the debate was to talk about the future of the country where if you have to correct mistakes and amend them, you have to do it. (I)

Alarms for spikes in infections are activated in five provinces