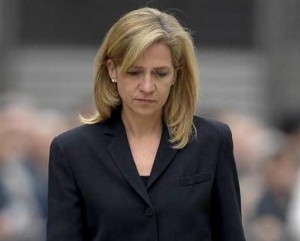 The government support to Princess Cristina de Bourbon, sister of King Philip VI of Spain, has declined. The new leader of the Parliament noted that the Princess should consider to voluntarily retire from the line of royal succession after being charged with two offenses of tax fraud.

In an interview published on Sunday by the newspaper El Mundo, Rafael Hernando noted that “Princess Cristina has to think about whether to waive her rights” of succession.

This, after the Prime Minister Mariano Rajoy said on Friday he was “convinced of her innocence,” but he said that he can not get involved.

King Philip said, without naming her, that public figures shall not “get rich” exploiting their positions.

“Citizens need to be sure that public money is administered to the legally established purposes, there are no favored treatment for a public responsibility (…) We must root out unceremoniously corruption,” said Philip VI.