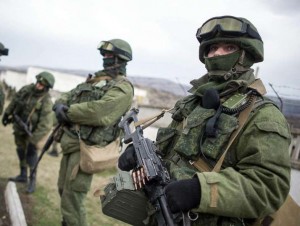 A dozen Ukrainian military have been expelled from the headquarters of the Sevastopol Navy in the Crimean peninsula, during Wednesday morning after the militia took possession of the headquarters where they resided.

The taking of this base located at the Sevastopol´s port, on the Black Sea, comes one day after Russia signed a treaty with local authorities in order to annex the region.

Groups of “self-defense” as they are called, were accompanied by armed elements which are supposed to be russian soldiers. The Government of Ukraine has denounced the action and has said that is living a war situation with Russia.

According to the media, the Crimean self-defense proposed to the Ukrainian soldiers to surrender and join them or leave the base.

The base commanders remain inside, where also takes place a meeting with 200 people, Crimean inhabitants, who stormed inside, planted the Russian flag and sang the anthem of that country.