Procedure of amendments in final stage after recess of assembly 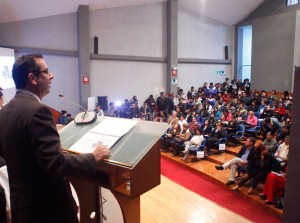 After the legislative recess, assembly members of the Temporary Commission for Constitutional Amendments have less than two months to finalize the citizen encounters in territories where the project promoted by Alianza PAIS (AP) is spread.

Juan Carlos Cassinelli, chairman of the commission, assured that in late October the dialogues will conclude and the processing of information will be realized in November.

The Constitution states that a constitutional amendment will be processed in two debates; and the second will be held within 30 days after the first year.

The plenary of the Assembly made the first debate on December 2, 2014; so, the second debate would be held between the 3rd of December of this year and January 3rd, 2016.

Despite the request of some opposition political and social organizations to withdraw or file the bill, the ruling party insists on keeping it and legitimizes it noting that there have been more than 80 dialogues to collect observations.