Property Registrar of Guayaquil replies on alleged delays with Biess 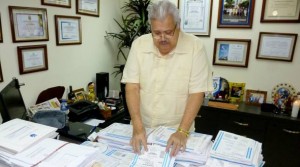 Ivole Zurita, Property Registrar of Guayaquil, said that about 150 procedures of mortgages of the Bank of the Ecuadorian Institute of Social Security (Biess for its Spanish acronym), would be ready to be processed by law firms but are still waiting in the Land Registry of Guayaquil. He added that there are procedures since June.

These remarks came after the Board President of Biess Victor Hugo Villacrés and the manager of Biess in Guayaquil Fanny Zambrano said that some procedures were delayed up to 30 days in the Land Registry, twice the allowed time.

He clarified that there are no delays caused by the registry and that even a differential treatment is given to procedures that arrive from Biess, in oder to be ready in 8 working days.

“Those mortgages that are not ready is because they still have observations, i.e, we already fulfilled. There are inconsistencies in names, identity card copies, there are missing documents for the payment of sale taxes, wrong dates given by the notary or the area measures does not match”, Zurita said.