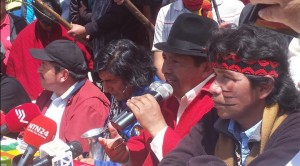 The Confederation of Indigenous Nationalities of Ecuador (CONAIE) has reported that some of its leaders have been called by the prosecution of Morona Santiago to give their version of the commission for alleged crimes of attack or resistance during the mobilizations of August 2015.

Those summoned by the Public Ministry are the highest leaders of the indigenous organization: Jorge Herrera, President, and Romulo Akachu, vice president. Herrera shall appear before the prosecution of the city of Macas with his defense attorney on Friday, April 8, 2016, at 9:00 am.

“This does not frightens us,” said the CONAIE president and confirmed that he will appear before the court. In his opinion, this is a strategy of the “government” to sow fear in the leaders of the indigenous movement.