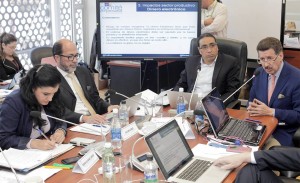 The members of Alianza PAIS (AP) in the Commission on Economic System of the Assembly are not willing to withdraw the government’s proposal to increase taxes on soft drinks, energy drinks and carbonated malt, although representatives of the sugar, brewer, commercial and manufacturer sector were present yesterday to announce job losses.

On the contrary, Rosana Alvarado (AP), member of the board, insisted that they are analyzing to include other types of sweetened drinks, which could be levied according to their sugar level, except for dairy and natural fruit products.

On the impact of reforms to employment and sales announced by the employers, Alvarado said that whenever these tax reforms are raised the arguments are the same. “It’s nothing new what we have heard,” she added.

Representing the National Federation of Sugar Producers of Ecuador, Miguel Perez said that 1,700 jobs would be lost, there would be a loss of $ 18 million because they would stop selling 2.2 million sacks and about eight thousand people would be affected indirectly by the tax rise to sodas.

IMF mission is in Ecuador to assess the economy