BREAKING NEWS
The airline Arajet will connect the Dominican Republic with Ecuador
Land iguanas reappear in Galapagos and this is the reason
UN: Ecuador is the third country in the world that seizes the most drugs
Ecuador detects new case of monkeypox and adds seven
‘Narco generals’: Comptroller finds evidence of three police officers
Florida court rejects appeal filed by Ecuador in Isaías case
18.5% of young Ecuadorians neither study nor work
Ecuador is a high-risk country for investment, says the United States
Ecuadorians abroad will be able to vote electronically in 2023
Three oarfish appeared in Ecuador during the last week

Last Wednesday at the National Court of Justice, the Attorney General accused former director of the Banco Central del Ecuador (BCE) and representative of the Unidad de Gestión de Derecho Público (Ugedep), Pedro Delgado, and other eleven former officials of the Cofiec bank and Seguros Rocafuerte, as alleged perpetrators of bank embezzlement by an irregular supply of credit of $ 800,000 to Argentine businessman Gaston Duzac, who is also listed as accused.

Six other executives of these institutions were identified as accomplices in the crime for which the penalty amounts to four to eight years in prison.

The prosecutor Galo Chiriboga made ​​the accusations, on the second day of the preliminary hearing trial and formulation of opinion which was chaired by the judge of the Criminal Chamber of the National Court of Justice, Paul Iniguez.

The prosecution hopes the judge will abide to their request to call to trial these 19 people at the end of the debate between the parties, in addition to requesting remand and precautionary measures for Delgado, who resides in the United States- as well as for the six accused of concealing; and expanded the order to Pedro Z., former president of Seguros Rocafuerte, who did not face these measures until yesterday. 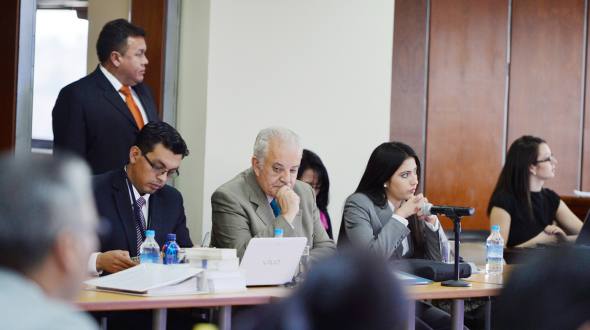 Galo Chiriboga at the National Court of Justice.