Prosecutor Diana Salazar used examples to explain why former President Rafael Correa did not sign the contracts with the companies investigated in the Bribes case or received illicit money . “Because I was on the cusp of the structure.” Then he asked himself: “Why would he sign if he had his minister?” 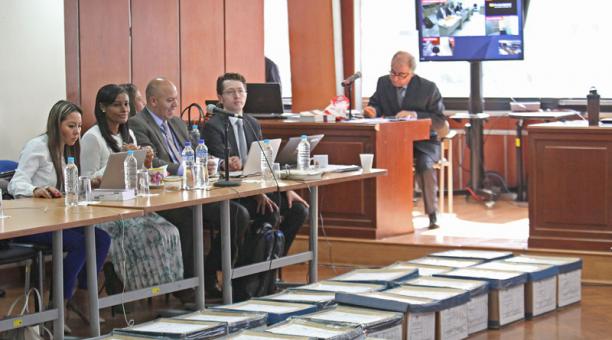 He then asked the Court to declare him an author mediated for the crime of bribery and that at the moment of imposing the penalty the highest penalty should be set. Rumors were heard in the room about how the calculation would be done . Then, in a recess , the attorney Íñigo Salvador said that this is a matter of analysis of the judges , but that they should use the two criminal codes.

In the current Code , the maximum penalty for bribery is seven years. In the previous criminal norm, in force in 2012, when the collection of bribes would have begun , the highest penalty was five years. The Prosecutor General was asked for his opinion in a press conference, and when he turned away from the chambers he said that “six years in prison should be imposed.”

Early, before the judges, Salazar delved deeper into mediate authorship and explained that this legal figure had been applied in the case of drug trafficker Pablo Escobar. “He said that in five years he hadn’t touched a single gram of cocaine and it was like that. Of course, when you are at that hierarchical level (higher) you no longer need to do the actions , but rather mobilize all the power apparatus they have. ”

According to his argument, “ Correa did not need to meet with the rockers or receive payments for bribes . Here was an organized power apparatus, ”he said.

Below the former president, according to Salazar, were the other senior officials. For them he asked to be declared direct authors and mentioned Jorge Glas, Alexis Mera , María de los Ángeles Duarte, Christian Viteri, Viviana Bonilla, Vinicio Alvarado, Pamela Martínez and Laura Terán , along with 10 entrepreneurs.

But for Martínez, Terán and the businessman Pedro Verduga he asked for reduced penalties.

In the case of the two women , effective cooperation must be taken into account. “This is a benefit for those who collaborate with justice, ” he added.
If they were convicted, they will receive a 90% reduction in sentence. This is stipulated in article 493 of the COIP.

“90%!” The former Viteri Assemblyman shouted and at the same time there were murmurs.

Salazar continued with his presentation. For Verduga, owner of Equitesa, the Prosecutor asked for a lesser penalty and invoked the figure of the “transcendental mitigating”.
This is another benefit for people who collaborate with justice and, where appropriate, requested that the penalty be one third of the years imposed on other entrepreneurs.

Yamil Massuh, ex-advisor of Duarte, was the only one on whom the Prosecutor said he did not have enough evidence to prove his responsibility.

In addition, he noted that he simply followed Duarte’s orders. That’s why he withdrew his accusation. After knowing that, Francisco Pesántez, Massuh’s lawyer and uncle, thanked “the objectivity.” “I would have liked my intervention to be in Quito, but we don’t have money…” and it broke out in tears.

He and the defendant followed the hearings through videoconference from the Guayas Court of Justice.

At the hearing, Salazar clarified that there is a supposedly illicit deposit of money from Massuh and stressed that that will be investigated. He announced that new inquiries will be opened “against all the defendants who are here” for money laundering, illicit enrichment and peculation.

He recalled that in the case of the Concorde building office, where Martínez and Terán admitted having received the money from the companies, that lease was paid with money from the Electric Corporation of Ecuador. According to the file, USD 30,000 from the State were used to pay for that office.

The Prosecutor requested that the State receive a comprehensive reparation and gave two figures. The first corresponds to the amount of contributions delivered by the entrepreneurs to Alianza País. This is USD 7.5 million. But for the repair, he said, triple this sum should be calculated. He added that the Court must also consider the total contracts for construction works that employers received. This value is USD 1 130 million.

Prosecutor asks for 8 years in jail for Rafael C.