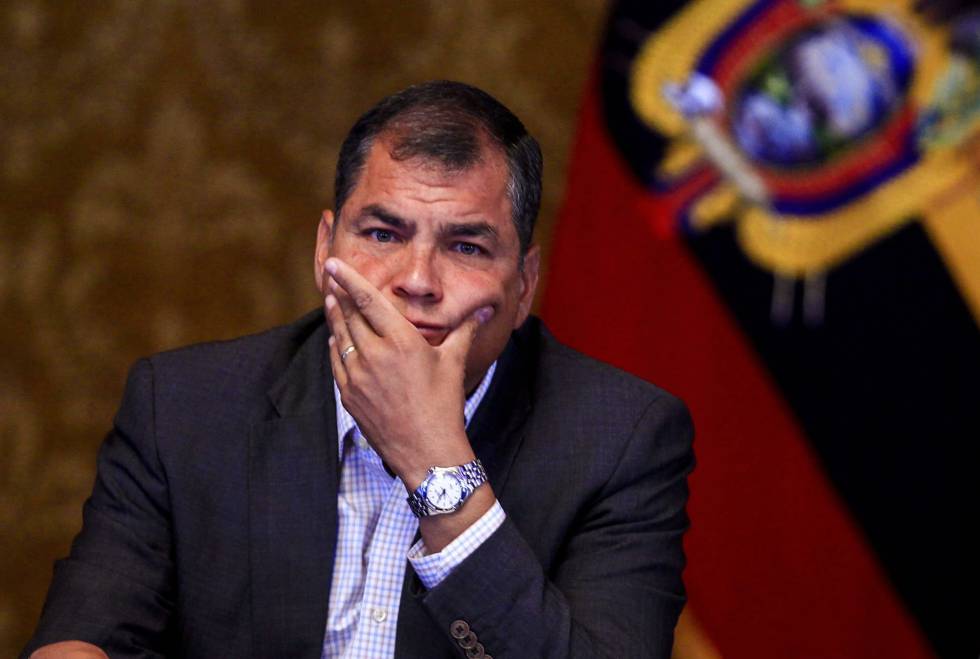 The file opened by the so-called Petrochina case has more than 3,500 pages. Since 2016, prosecutor Fabián Salazar has collected information on the sale of crude, but in the last month has accelerated the investigation and has already taken two versions.

The first was to Enrique Cadena Marín, an Ecuadorian businessman who has been identified as a possible intermediary in the transport of oil that leaves the country. And the other statement was taken to former oil unionist Fernando Villavicencio, one of the complainants in this case.

Former President Rafael Correa is scheduled for this Monday, February 5, 2018, at 09:30. According to the Office of the Prosecutor, the diligence will be carried out in Guayaquil. It will be the first time that the former head of state gives a voluntary version on an alleged case of corruption.

Correa said last Wednesday (January 31) that he would attend. “I will always fulfill my duty as a citizen, despite everything I will continue to trust in justice,” he said in Quinindé, in Esmeraldas.

The former president said he only signed an agreement in 2010. “But the law changed thereafter. I have not signed more. They accuse me of 2016 oil pre-sales, but they will have to prove. ”

Under the Correa period, Ecuador signed seven oil presales contracts with Petrochina. The first agreement was signed in July 2009, in exchange for an advance payment of USD 1 billion. By means of this figure, which had not been used before, the Treasury obtained resources for its budget with the condition of committing the sale of its future oil production.

After this first contract, the application of this financing modality became recurrent. Until 2016, Ecuador signed 13 presales (including seven with Petrochina, two with Petrotailandia and the rest with Unipec).

The country undertook to sell 763.8 million barrels of crude oil to Petrochina until 2024. In exchange, it received USD 9 970 million in credits and advances.

The signing of these agreements was direct and without competition and was supported in the strategic alliances between state companies. In the case of loans granted by Chinese banks, special agreements were also signed, in which delegates from the Ministry of Finance and Petroecuador participated, as well as Chinese banks and companies. Precisely, the investigation into the Petrochina case involves other officials who participated in the signing of the contracts. One of them is Nilsen Arias, former Petroecuador International Trade Manager who led negotiations with Petrochina. Prosecutor Salazar called the former official at 3:00 p.m. today. Bayardo Poveda Camacho, cousin of Rafael Poveda, minister of the Strategic Sectors in the Correa government, must appear an hour before.

The crime that could have been behind the pre-sale still has not been determined in the Prosecutor’s Office. “There may be one or criminal concurrence,” said Salazar.

According to the complaint of Villavicencio and the Pichincha Bar Association, the damage would be at least 2.2 billion. And they have ensured that the pre-sale conditions were less favorable for the State.

For example, the award paid by Petrochina in favor of Ecuador for each barrel of oil fell progressively and without technical support, according to reports from the Comptroller’s Office. Ecuador must deliver crude until 2024 with an extra value per barrel of USD 0.25.

In the first contracts, prizes of between USD 1.25 and 1.30 per barrel were agreed. In 2014, Petroecuador stopped making public tenders for the sale of its oil. That made it difficult to know how much the market was paying for Ecuadorian crude.

The current government reviews the agreements

According to reports from the Comptroller’s Office, Petrochina proposed a complex formula, which includes 13 factors and which was accepted by the previous government. The current regime has questioned this mechanism and now the agreements are under review.

In the cost that Ecuador recognizes China for the transport of oil have also been noted inconsistencies. To calculate this item, the average cost of the Esmeraldas-Houston and Esmeraldas-Los Ángeles routes was contemplated; in Panamax vessels of 360,000 barrels.

According to a report by Arthur D. Litlle on June 13, 2014, prepared for Petroecuador, the average value of freight for both routes, as of June 2014, was USD 3.28 per barrel. But the contracts do not include a

liquidation with the real value of the contractors’ shipments, which are not only destined for Houston and Los Angeles, but also for Peru, Chile and Panama. In addition, crude oil is transported in vessels of greater capacity.

Although it is not yet known how much the country loses due to this issue, the Ministry of Hydrocarbons has detected that the damage, in some cases, is 60 cents per barrel.

Another element that worries the Government is that Ecuador delivers to China up to four times more crude than it would correspond depending on the credit or advance granted.

In October 2017, the Regime proposed a renegotiation of pre-sales. In case there is no agreement, the possibility of pre-canceling the contracts is not ruled out. Ecuador must still deliver 288.8 million barrels of oil to Petrochina for these commitments. (I)