BREAKING NEWS
Achievements of digital transformation are exposed in “A Digitized Country, A Modern Country”
Yaku Pérez: ‘I am not a supporter of violence; I am adept of a resistance ‘
If the bill for the Defense of Dollarization in Ecuador is not approved, the next IMF disbursement of $ 450 million would be put on hold
77 rural schools will open their doors amid the pandemic as part of a pilot plan
New technologies and the use of digital banking are key to reactivation, according to expert
Local mafias vie for spaces to operate with Mexican cartels
Remote work continues in the public sector of the Executive until March 14
A bacterium protects the lupine from its main threat and would increase grain production in Ecuador
Despite pandemic, air transport of flowers was the second best in eight years
Germany, Ecuador and Ghana concerned about marine plastic pollution

Investigations into the illegal sale of medicines in the health emergency have made it possible to trace the financial movements and properties of the Dalo brothers, Jacobo and Michel Bucaram Pulley. 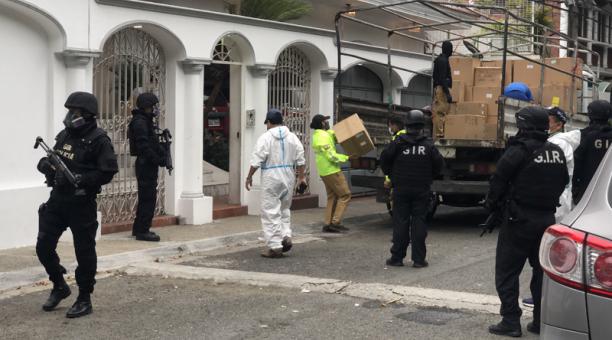 These signs have been collected in less than two and a half months. In that time, the agents have drawn up a line of investigation based on the companies that have the three sons of former President Abdalá Bucaram , and his daughter-in-law Gabriela Pazmiño in their names .

The Prosecutor’s Office has a list of 16 companies that are investigated, to see if illicit acts were committed through them.

According to official data, the youngest of the three, Michel, has the largest number of companies : seven in total.

Investigators say that through these firms they found their link with Daniel Salcedo , also prosecuted for acts of corruption in public hospitals in Guayaquil.

Reports on Michel Bucaram also indicate that he maintains a drug distributor in Guayaquil . The agents do not rule out that part of the illegal sale of drugs was carried out in this way during the covid-19 pandemic .

Another aspect that the prosecutors analyze are the capital movements of the three and if these are duly justified. The first analyzes showed possible anomalies.

In Michel’s case, the Prosecutor’s Office indicates that he took money to tax havens and the United States . There are records that it did not justify USD 1.2 million.

The case of Dalo Bucaram is similar. The authorities say that maintains relationships with three firms, whose activities are verified yet. In addition, the business he maintains with a farm, a soccer team and the accounts related to his political party are reviewed.

The agents track this last data, because among those prosecuted for illicit association is Jorge Enríquez , a former alternate assembly member of Pazmiño. In fact, the tax file indicates that illegal acts were committed in the Teodoro Maldonado Carbo Hospital of the IESS in Guayaquil through this relationship .

Dalo’s defense rejects these accusations and maintains that this process is a persecution of the family.

He points out that he did not commit illegal acts and that all his actions are within the established legal norms.

In addition, it indicates that your client has all his assets duly justified.

The investigators disagree and reveal that there are differences between the money that has been declared to the SRI and the analyzes carried out by the Financial Analysis Unit ( UAFE ).

In these reports it is said that he has sent money to Panama, the Netherlands, Luxembourg and the US He currently resides in the latter country, with his four children and his wife , also indicated by the Prosecutor’s Office.

About her, the researchers have found that she maintains a relationship with two companies. One would have aesthetic services as an activity .

According to reports , Dalo’s wife has maintained an income of over USD 1.2 million and would not have justified USD 172,807. She also registers foreign exchange outflow to Panama, the Netherlands and the USA.

In the case of Jacobo Bucaram , the investigations indicate that he maintains four signatures linked to his brother Dalo and his sister-in-law . UAFE reports indicate that it has not justified USD 178,862.

The Prosecutor’s Office has in its possession the statements made against them by the Israelis who were detained in Santa Elena , last June.
The foreigners pointed out that Jacobo Bucaram had given them USD 100,000 for the purchase of medical supplies.

Jacobo, eldest son of the former president of the Republic, also maintains two other processes for the alleged crimes of organized crime and trafficking in property. The National Police are looking for , then upon him bear a remand order.

The same applies to his brothers Dalo and Michel. They have asked the judge in the case for a bond request to set a bond. That appeal will be reviewed on September 14, at a hearing .

In the diligence, a bond will be reviewed for Gabriela Pazmiño , who did not appear before a judicial unit on August 8, as ordered by the judge in the case.

The judicial authorities collect more evidence to determine the levels of responsibility that would exist on the Bucaram brothers.

Judge Daniella Camacho responded about the sentence against Rafael Correa