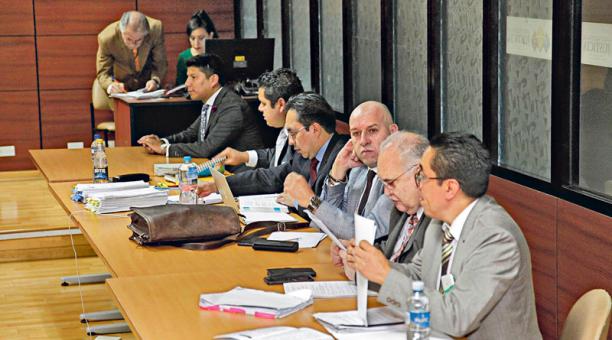 The judicial file on the Balda case sheds more data regarding the policemen captured for the kidnapping of the ex-legislator, in 2012.

Who are and what functions fulfilled these agents before their connection in this cause?

Chicaiza is 43 years old and got to obtain the rank of sergeant first of the Police. Before being assigned to travel to Bogotá and organize plagiarism, he had passed, for example, through the Directorate General of Intelligence of the Police (DGI). In his testimony delivered to the Court, he said that he worked there until 2010 and that he was later transferred to the National Intelligence Secretariat (Senain), created in 2009.

Judicial records show that the arrival of Chicaiza to the Senain coincided with the creation of the so-called Electronic Scanning Unit, which according to the agent was operating on the 17th floor of the Benalcázar 1 000 building, in Quito.

In that unit he handled devices that allowed to verify if in the ministries or in the entities of the State had been placed spy cameras, data capture systems or wiretapping. The uniformed officer testified before Judge Daniela Camacho that they instructed him to train 24 police officers in the use of this type of technology.

After that training, the agents were assigned to the DGI, to the Senain and to the Internal Security Management Unit of the Presidency of the Republic (UGSI). A year later (2011), when Pablo Romero assumed the National Undersecretary of Intelligence, he received a new task: to identify in social networks all those who expressed themselves against the central Government and especially against President Rafael Correa.

But on May 30, 2012, he received Romero’s order to travel to Colombia to locate Fernando Balda and there the operation called “Wilson” began, Chicaiza said.

These data were given as part of the cooperation with the justice, with the intention of benefiting from a reduction of the sentence. Now, those data are verified by the Office of the Prosecutor.

Diana Falcón, on the other hand, is the second corporal. She joined the police on July 22, 2010 and in her police resume she is said to have served in the DGI until May 2013. She mentioned that she worked for the Electronic Scanning Unit, but that does not appear on her resume.

She stated that in June 2012 she received a call from Raúl Chicaiza. He was her immediate boss and had asked her to go to the offices of the Senain, because Romero was waiting for her there, who by that time was already heading that Secretariat.

The director of intelligence, Fausto Tamayo, should also be there. In that meeting they told him that he was going to participate in an operation. “Mr. Romero asked me if I had already done some intelligence operation and I said no. I asked him what it was about and he told me that I should only see that my partner was well. ”

Jorge Espinoza, the third agent processed, has no more information. His resume reveals that he is a non-commissioned officer and that since 2016 he worked in the Intelligence Service. Chicaiza said in court that his partner did not participate in the operation.

The migratory movements of the agent show that on August 10, 2012 he traveled to Bogotá and returned three days later. Chicaiza explained that days before he traveled to bring Balda to Ecuador he found himself “coincidentally” with Espinoza. The latter would have told him that on the holiday he would travel to Bogotá. “I offered to buy the tickets and we were paid later,” said Chicaiza.

That would be a first element that involved Espinoza in the case of kidnapping. Another element that relates it is the payment of a dinner from the people who were going to perpetrate the kidnapping of Balda and that appears on his credit card. This third agent has remained silent and decided not to cooperate with justice, as the other two did. (I)