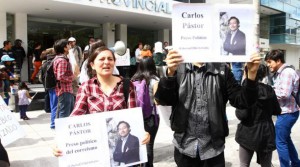 This year, the Prosecution has reported in the country at least 168 people arrested during demonstrations against the government. Data from this body show that 70% of them remained in custody. They were prosecuted for assault and resistance, stoppage of public services, incitement to discord, possession of weapons, damage to property of others and dishonoring the police.

Eight students of the Mejia High School were part of the list of detainees. Five were tried in June. They were accused of sabotage, a crime against the state punishable with imprisonment from five to seven years. Then, the prosecution changed the offense for damage to property of others, which has a lesser sanction.

One of the defendants asked to only be called Mateo. He was sentenced to two months in prison for protesting against the removal of the night school, something that was denied by the Ministry of Education.

Municipal works in health and education will need the State approval