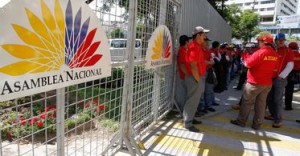 The workers of different provincial councils in the country will meet to discuss the possibility of a reform that would make the public workers be based on the Public Service Law instead of the Labor Code.

The amendment proposes changes in Articles 229 and 326 and would create a transient for the workers of the public sector, those who before the effective date of the amendment are subjected to the Labour Code, uphold the rights granted by that body. And,the ones that enter after the term will be subjected to the provisions governing it.

Byron Celi Gonzalez, of the Federation of Workers of the Provincial Councils of Ecuador, said they will meet to discuss the issue and a mobilization shall be organized “with all” against the Assembly.

Celi does not trust in the transient. “They are transient. During what time? and, who will benefit? The rules must be clear so that they can regulate us, but these transitional rules would be discriminatory and unconstitutional because others who enter to the public sector could not be in the Labour Code”, he said.