Puppets give color to several cities of the country 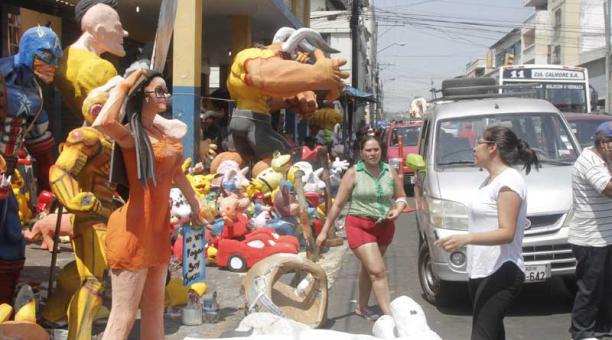 Giant paper puppets from the Guayaquil´s suburb, in the coastal province of Guayas, already have their own touristic route. The puppets that are traditionally sold to be exhibited and burnt as a symbolic farewell to the old year, and in some cases surpass the eight meters of height, can be observed along several streets of the suburb.

This year, the municipality of Guayaquil promotes a tour that allows tourists enjoy these cardboard and wood giants, built by the inhabitants of the sector. Their creation can take up to two months, depending on the complex details. 27 puppets, mainly characters of comics and animated series, will be exhibited.

In Atahualpa, Ambato, in the Andean province of Tungurahua, the puppets are not made with paper or sawdust. The ‘viejos’ are of flesh and blood. In this Ambato parish, since 56 years ago, the celebration of the ‘Años Viejos’ is celebrated. Every year, the inhabitants of this sector choose the most representative people, to give them this designation and the traditional widows (men disguised as women) accompany them. This festival will start on 30 December and will culminate on January 1, 2017, with the presentation of artists and folk dances. “It is a point of pride to be appointed as “Año Viejo.” It is a privilege to collaborate with our parish, so this tradition lingers,” says Santiago Garces, President of the Committee for Años Viejos.