The closing of borders and a decrease in the demand for products are two effects that the coronavirus or covid-19 begins to leave in commerce . 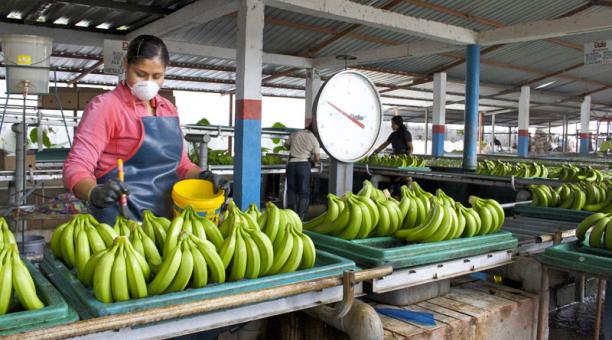 Foreign Trade Minister Iván Ontaneda said that there has been a reduction in purchase orders and acknowledged that there is a “slight decrease” in sales. “The purchases are not being placed immediately and the dynamism is slow,” he said.

The closure of Turkey’s border with Iran directly affects banana shipments to the Middle East. This block receives the fruit through the port of Mersin, in this country.

Fabricio Espinoza, president of the Board of the Association of Banana Exporters of Ecuador (AEBE), said that the closure has prevented the passage of containers to Iran and Iraq. And that generated loss of fruit, although the guild gave no figures.

With 53 million boxes shipped, the Middle East was the fourth destination for bananas during 2019.

In the case of shrimp, Italy stopped and reduced crustacean orders until it saw how “ citizenship and disease reacts, ” according to José Antonio Camposano , president of the National Chamber of Aquaculture (CNA).

The manager explained that consumption in this country fell because people avoid leaving home.

Italy was the fourth destination of crustacean shipments after China, USA. and Spain

The head of the CNA said that “the effects of the new situation of covid-19″ will be felt more strongly in April and May.

The tuna sector, which also arrives with its canned products in the European country, has not had any fectations so far. According to reports from the Ecuadorian Chamber of Industrial and Tuna Processors (Ceipa), the demand remains in Europe . “The people who are in their houses conserve the canned ones without inconveniences”, detailed the head of the union, Mónica Maldonado.

Another product affected is pitahaya. Hong Kong, which absorbs more than 70% of Ecuadorian production , is not demanding the fruit. This factor and a fall in prices have impacted the sales of the sector, said the president of the Association of Pitahayeros and Alternative Crops of Pastaza, Guido Álvarez.

Although the price of the kilo of this fruit fell from USD 4 to 0.80 in the last two months, the fall deepened after the coronavirus crisis .

The producers of the sector asked to meet with the Agriculture and Production Portfolios to present their situation and request the opening to markets such as Peru and Chile to place the fruit that the Asian giant does not capture.

In imports, there are cases of delays of 30 to 45 days in the dispatches of Asian raw materials and supplies for the textile sector, reported Javier Díaz, head of the Textile Industries Association of Ecuador . These companies require buttons, closures , fabrics and other supplies that they acquire in that market.

For Xavier Rosero, technical manager of Fedexpor, if the virus continues to spread, the effects on the economy can extend until the end of the year.

In addition, because of the coronavirus , exporters avoid the increase in logistics costs and the slowdown in consumption also in countries such as Japan and South Korea.

Rosero said the problem is transversal and is also affecting products such as cocoa and flowers.

To address the incidence of the virus in trade, the Government and private sector proposed four measures to mitigate the impact of covid-19.

One of them is the placement of credits to give liquidity to exporters, the formation of monitoring tables and the implementation, by the shipping companies, of new routes. And the exporters requested the immediate implementation of the ‘drawback ‘ or return of trade taxes.

As part of the Government’s measures to deal with the epidemic, the Foreign Trade Committee (Comex) notified the National Customs Service of Ecuador about the ban on exporting masks for a period of one year. This is due to the temporary health emergency that the country is going through.

In addition to this request, Comex issued last January 29 – prior to cases of coronavirus registered in Ecuador – resolution 002-2020 to facilitate the import of 24 subheadings ; Among them are soaps.

The banana from Guatemala is exported to USA. And what is the situation of the Ecuadorian banana?