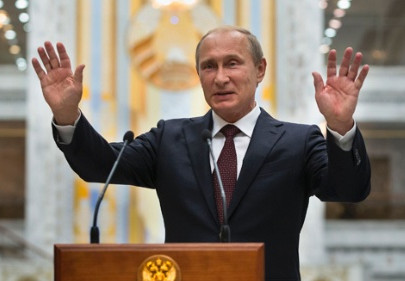 Russian President Vladimir Putin has called on pro-Russian militias in eastern Ukraine to open humanitarian corridors and allow the withdrawal of government force soldiers, who are surrounded.

“I call on the rebels to open a humanitarian corridor for Ukrainian troops who left surrounded, in order to avoid unnecessary casualties and give them the opportunity to withdraw from the area of ​​operations forces,” Putin said in a statement aimed at the “insurgents Novorossia “.

Putin said that “it is clear that the militias have had important successes” in their battle to stop the operation launched by government forces in eastern Ukraine.

However, he said that this represents “a deadly threat and which has already caused huge losses among the civilian population.”

The Russian president urged Kiev to “immediately stop military actions” and “sit at the negotiating table with representatives of Donbas” (Donetsk and Lugansk), to solve all problems “exclusively by the peaceful path”.

Angelina Jolie and Brad Pitt are getting married privately in France