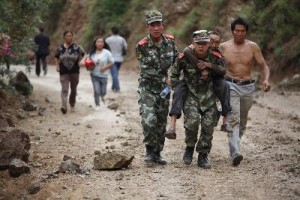 About 398 people died and nearly 2,000 were injured in a strong earthquake in Yunnan (southwest China), yesterday.

The quake registered a 6.1 magnitude and occurred at 16:30 at a depth of about 10 km, according to the USGS geophysical service of the U.S.

Chinese President Xi Jinping called for a “maximum effort” to help those affected, while the UN Secretary General, Ban Ki-moon, “presented his condolences to the Chinese government and the families of the victims”.

Videos show the habitants going out to the streets terrified by aftershocks.

State media announced that 2,500 troops would have been sent to affected areas, who joined a team of more than 300 police and firefighters.

Missionary infected with Ebola is transferred to the U.S.