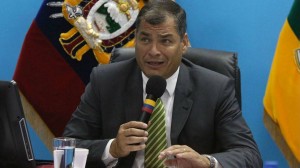 President Rafael Correa said this Thursday that the crime investigation of the two Argentinian’s deaths is “being handled responsibly” and said the Ecuadorian government will accept “any criticism, any suggestions” coming from the victims’ families.

The President, who was in the city of Zamora, had a conversation with the media, and he highlighted that “40% of homicide cases are solved by the police before seven days”.

Correa added that he has received calls from the President of Argentina, Mauricio Macri, and the who could not answer because he was involved in the works done in Zamora. “I believe they wanted to announce they will be sending Argentinian experts to Ecuador” added the Ecuadorian President. “I am told they are arriving to the country right now, so they are welcomed. And for the victims’ families, we accept everything. We understand perfectly. I do not know what I would do if I were in the shoes of the victim’s parents. We will do as they ask and we will work together, “he added. (I)