Rafael Correa appointed as responsible for poor management of public debt, according to Comptroller 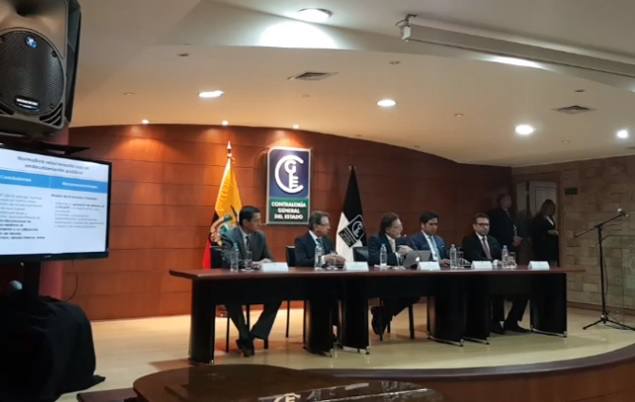 Former President of the Republic Rafael Correa, his finance ministers, undersecretaries of Public Financing, national director of Public Financing Monitoring and Evaluation and the general legal coordinator of the Ministry were identified with criminal responsibility within the audit of internal and external debt that The General Comptroller of the State performed for nine months.

The criminal responsibility in the reports indicates that crimes that would be punished with jail have been committed, and that now must be determined by the State Prosecutor’s Office.

The comptroller Pablo Celi, announced on Monday the main findings, mandatory compliance recommendations and criminal and administrative responsibilities arising from these discoveries.

The findings have to do with five basic irregular aspects: the change of regulations to allow discretionary indebtedness; the issuance of ministerial resolutions that allowed the secrecy of the debt. Additionally, the issuance of Decree 1218 that changed the way of calculating the debt-to-GDP ratio, as well as the failure to include the oil presales as part of the debt despite the fact that it was paid with interest and even not only with oil, but with money from the treasury. Finally, irregularities have been found in an agreement signed between Petroecuador and the Ministry of Finance for which the oil company managed loans for the Government.

The criminal responsibilities were established in relation to the signing of Decree 1218 of October 20, 2016 signed by Rafael Correa. Through this decree, the methodology for calculating the debt-to-GDP ratio, not provided for in the law, was changed, which made it possible to approve new debt without the approval of the Assembly and without the strengthening and planning plan mandated by the law once 40% of the debt ceiling had been exceeded. With the decree, in practice, the debt of the IESS and other public entities amounting to around $ 11,000 million were excluded.

In this sense, five recommendations of mandatory compliance were also presented, among which it is established to prepare a project for the repeal of Decree 1218; carry out a reform of the Planning and Finance Code, with which comprehensive controls and transparency are established, eliminate resolutions declaring the secrecy of the agreements even until the payment of the credits is completed; Incorporate presales values into debt statistics; to leave the inter-institutional agreement between Petroecuador and Finanzas unsubsistent, and sign another for the restitution of resources.

León Roldós, member of the citizen oversight that accompanied the performance of the audit clarified that this report is authored by the Comptroller General and congratulated the work. He said that the oversight, consisting of twelve personalities from the economic, legal and business, supported with points of view and conceptual discussions. He noted that according to the Constitution, in terms of public debt the constitutional provision says that there is no statute of limitations or expiration. He explained that there is no possibility of claiming prescription for established civil and administrative responsibilities. As for the evidence of criminal responsibility, explained that there is no statute of limitations for this type of crime, as is the case of embezzlement.

For Roberto Aspiazu, executive director of the Ecuadorian Business Committee (CEE), the report represents “a real bath that the country was in need of.” He sees positively the figures, including in the debt issues such as oil presales and the logical consequence of this will be that Finance must present a plan for strengthening and sustainability of the economy.

On this subject, the Minister of Economy, who must execute the recommendations of the Comptroller’s Office, has said that the pre-sales are not debt. (I)