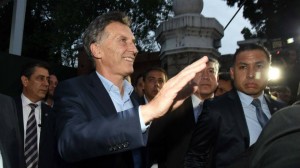 Tuesday, President Rafael Correa considered “of great concern” the position of the elected president of Argentina Mauricio Macri, who announced that he will request the Mercorsur the application of the democratic clause for Venezuela by the “persecution of opponents.”

“It’s very concerning. It is clearly an interference in the internal affairs of Venezuela,” said the president during a conversation with journalists, whose country is an associate member of the bloc.

“In Venezuela, like it or not, there is a democracy, and there is a political project that is tired of winning elections. If there are political persecution, etc … prove it! They say the same of Ecuador. Every time these people attack a police and leave him half dead, then they victimize and say they have been repressed and go to the IACHR, ” said Correa.
Source: http://www.eluniverso.com/noticias/2015/11/24/nota/5260506/rafael-correa-considera-muy-preocupante-posicion-mauricio-macri