Rafael Correa is backing away from tax payment to retirees. 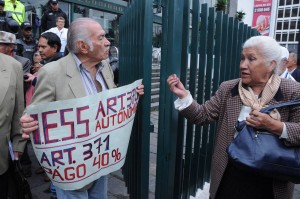 President Rafael Correa announced yesterday that the tax reform for retirees who have higher incomes pay income tax (IR) will not be approved because it is unconstitutional.

Although it notes that this reform responds to a need for justice and a principle of solidarity, the president said that the rule violates the third paragraph of Article 371 of the Constitution.

This provision states: “The benefits in Social Security money will not be eligible for assignment, seizure or detention, except in cases of food due by law or obligations in favor of the insurance institution, and shall be exempt from paying taxes.”

Correa explained that Social Security Institutes of the Armed Forces and Police are too many differences in amounts according to the degree to which they retire. (I)

Correa on leaks: “‘wonders’ will come out of this. We’ll see who’s who.”