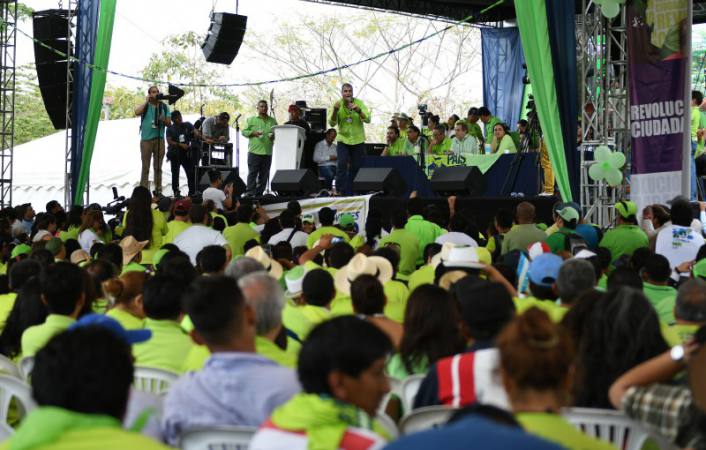 Cries and aggressions of those who follow former President Rafael Correa marked his return to the country and his departure as well. His ten days in Ecuador left dissident images when he was head of state.

Since November 25, his first days in Guayaquil, on the balcony of the headquarters of Alianza PAIS (AP), few were the ones who arrived in green and with posters to welcome him. The video taken by someone who accompanied him shows a group in the middle ofan empty street.

The next day, in Cuenca, the place for the reception was different from the times of the campaign, not in the area of the Historic Center where their caravans used to go. Now it was the small Plaza El Rollo, and it did not fill up. “We will be less, but we will be more,” said Correa, referring to the fact that they would remove the traitors. That’s why he came to the country, to move the AP bases that support Lenin Moreno’s government and expel his successor from the movement. But he couldn’t, the Electoral Council recognizes Moreno as AP leader.

In the cities he visited, he did not find the treatment he expected. During his time in Manabí he publicly claimed that the Oromar channel did not give him an hour of interviews and he did not accept the 14 minutes that channel gives to all interviewed. He went from radio to radio and from Quito he spoke with CNN that reminded him of the air he had said that they do not see that station: Why is he here? “Because he invited me.”

And in Ibarra the agglomeration in the square Francisco Calderón was countered by his detractorsto cries of “prisoner, Correa, prisoner” and singing him “Rata de dos patas” (rat of two legs). Today he returns to Belgium and plans to stay therefor three years, he told FMMundo. (I)

The earthquake in Manabi only left material damage