Rafael Correa moves his pieces according to a strategy, says Viteri 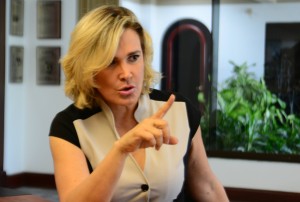 “The President (Rafael Correa) does nothing by chance, he moves his chess pieces according to a political strategy, he does not act in good faith,” said Tuesday Assemblywoman Cynthia Viteri (PSC-MG). The lawmaker spoke that way about the president’s announcement last Friday of incorporating a transitional provision to the amendment that deals with indefinite reelection.

The Executive branch stated: “I have been proposing a transitional provision to the amendment that allows the possibility to run without restrictions, but with a transitional provision that prohibits only for these elections of 2017 the participation of Assembly members who are adopting the amendment, and already have served two terms, and the President of the Republic who also has served two terms (…). ”

Viteri said in Ecuavisa than any Ecuadorian -with the exception of the Executive branch- needs a constitutional reform for 2017 or 2021, in order to run for President indefinitely.

So according to the assemblywoman, the amendment on indefinite reelection “comes with a dedication, is personalist, and is addressed to the Head of State.”