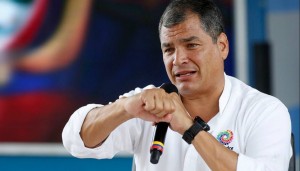 The Ecuadorian president Rafael Correa, this Saturday, requested SOLCA to give the control of their facilities to the State, if they are nor able to “attend their patients with the same or better quality” as in the past. This request was formulated after the fact that SOLCA was complaining to the president about money owed by the government.

The president let know the public about his respect towards SOLCA, but afterwards, he questioned: “How come, in this country, we allow private organisations to function with money provided by the State? If such organisations provide a public service, then the organization should be public”.

And he added: “If it is hard for them to be good samaritans and still depend on outside resources, then we should not follow along… this is not a political game (…); don’t worry, give us your facilities and we will attend the people. But we have to stop letting organizations play the game of the “Good Samaritan” when they depend directly on the State.” (I)