The tenth day of the trial hearing of the 2012-2016 Bribes case ended yesterday with the presentation of the evidence of the former president of Ecuador Rafael Correa and the former vice president Jorge Glas. 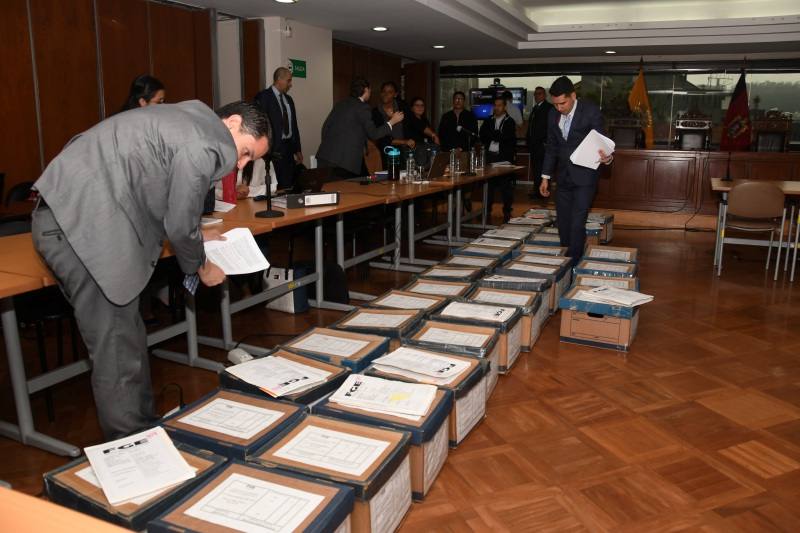 However, the latter was interrupted and postponed for next Monday after the Court accepted the request of his lawyer, Harrison Salcedo, to call more than 100 witnesses.

The state attorney general, Diana Salazar, objected and asked to specify the names of those witnesses and the relevance. In addition, he alleged that some of those experts or witnesses were excluded by Salcedo.

But after the deliberation of the magistrates, they were summoned by means of the public force.

When it was Correa’s turn, his lawyer, Fausto Jarrín, proposed the introduction of two new tests. The one, a report issued by the National Electoral Council (CNE) after the evaluation and preparatory trial hearing, on December 16.

Jarrín also requested the presence of the electoral members who approved that report. According to him, the CNE determined that there were no illegal contributions.

At this point, the lawyer questioned the Prosecutor’s Office to establish the crime of bribery allegedly without contracts or consideration.

Correa’s other test, his lawyer said, was an electronic device whose information would allegedly show that the 2012-2016 Bribes case would have been born from a flawed evidence obtained by the former National Intelligence Secretariat (Senain); also, of illegal listening and tracking.

Jarrín asked for an expert report on the electronic device because, according to him, the so-called Green Archives presented by the Prosecutor’s Office were not and were not extracted from the computers of Laura Terán and Pamela Martínez, both of which were also processed, but were information from the Government’s intelligence apparatus which was delivered to journalists.

Jarrín’s request for expertise was supported by some of the 20 prosecuted. However, Pablo Muñoz, a lawyer from Terán, clarified that the existence of the Green Archives has already been proven.

The ex-president, through Twitter, said that the Green Rice files that the Prosecutor’s Office showed were hacked and adulterated, according to an expert carried out by the Colombian company Adalid Corp.

Prosecutor Salazar rejected the intention of Correa’s defense and said the time to announce or test the evidence was over. And that is intended to surprise with an alleged report to try to induce error.

Salazar also indicated that the Green Archives were expert. Muñoz added that the codes are even mentioned in emails from 2011 to 2016.

In the end, the Court deliberated and denied Correa’s request.

Jarrín said the defense anonymously obtained the device it intended to include as evidence. Like Correa, he said they had denounced the fact before the Inter-American Commission on Human Rights (IACHR).