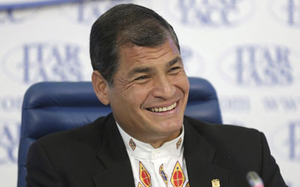 The regime leader Rafael Correa, will begin his schedule in Paris, France, starting tomorrow. Correa will not only visit Paris, he will also go to Poitiers, Lyon and Nice, until Sunday, the day he returns to Ecuador.

Correa plans to give five speeches during his stay in France, the first being in the city of Poitiers. On Wednesday he will carry out ​​his speech at the Sorbonne University in Paris, where he will discuss the achievements of his regime, most notably the reduction of poverty, the recovery of non-renewable natural resources and other issues.

On Thursday, from 15:40, will give a lecture before the assembly of the 37th Conference of Unesco, which begins today and ends on November 20. Correa will present his project on Yachay City Knowledge, built in Imbabura, and explain that their goal is to promote the exchange of science and technology, culture and tourism.

Part of the agenda is that the leaders of Ecuador and France to meet and have lunch together. This will be after the meeting with the Business Council Correa French, where will his fourth speech.

Finally, on Friday concluded his official visit to Paris to meet with academics and France, where he will present his book “Banana Republic to Non- Republic,” in French edition. That same day, evening, lunch with the mayor of Lyon, Gerard Collomb and then travel to Nice.

Correa will begin his return trip to Ecuador on Sunday, November 10. Thus ending his 15-day visit that has taken him to Russia, Belarus and France.