Rain cause the non-delivery of electoral credentials in Pichincha 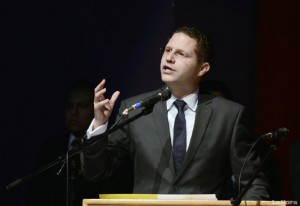 Members of the new local authorities of Pichincha were yesterday at the National Theater of Culture awaiting their electoral credentials. These will allow them to take office tomorrow of their charges, but authorities could not arrive to the event because blocked road by the rain.

The ceremony was organized by the National Electoral Council (CNE), which had planned to deliver yesterday 672 credentials for Prefect,  Viceprefect, Mayors and Councilors of Pichincha.

The Mayor of San Miguel de los Bancos, Sulema Pizarro Cando, and some councilors members were not present.

Domingo Paredes, CNE President, invited the elected representatives to not fail those who elected them, and build a direct and participatory democracy, beyond ideologies.“We can not only work on physical investment, we have to build a new citizen ,” said Paredes.

On behalf of all mayors , Mauricio Rodas, current Mayor of Quito, reaffirmed his commitment to work with effort, toughness, passion and heart. He also said he needs all residents of the city to “rescue and transform Quito, and turn it into the city they have always dreamed “.