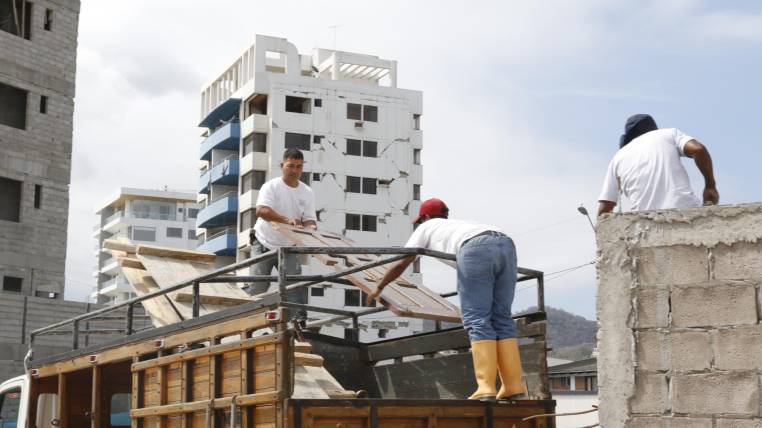 Vladir Villagrán owns one of the 14 hotels that were able to survive in Bahía de Caráquez after the earthquake of April 16, 2016. In the cantonal capital of Sucre, 35 buildings were affected, including 21 dedicated to the lodging business.

The five-story Miguel Hilario Alcívar hospital also succumbed, and the emblematic Eloy Alfaro school, which had been replenished and days before the earthquake, was to be reopened.

In replacement of both works, the authorities installed temporary buildings. The caraquenses are still waiting for the new health and education infrastructure that was offered.

“After Moreno took office, there was lethargy in the reconstruction of Bahia. We see incredible delays in the delivery of works, “questions Villagrán, who gives as examples the unfinished work on the access road to Bahia, which should have been delivered in November 2017, and the burying of cables, whose task has involved the intervention and closing of streets.

As EXPRESO published yesterday the delay in the works and the wait for delayed projects is cause for complaints also in Manta and Portoviejo, by affected sectors.

The Committee of Reconstruction, through its technical secretariat, announces for this year the culmination of outstanding works and the execution of new ones in Manabí and Esmeraldas. The list includes infrastructure in education, health, housing, potable water and sewerage, irrigation, roads, and those in the port.

The agenda includes 43 projects that require an investment of $ 491’023.922,63. A dozen public agencies will receive the resources to execute them.

The new technical secretary, José Herrera, acknowledges to EXPRESO that there is a backlog of work in the affected areas of those Manabitas localities. He advances that they will resolve conflicting situations, such as the construction of artisanal fishing ports “that were not flowing”. In the first quarter of this year, it is expected to sign the complementary contracts for the fishing facilities of Chamanga (Esmeraldas), Cojimíes, Crucita and Puerto López (Manabí), for a total of $ 15.1 million.

Herrera explains the reason for the delay in the repair work in the zero zones of Manta and Portoviejo. He argues that in both cities “there has been a lack of gear” in the schedules of the works that were contracted by the Government and the local councils.

The Reconstruction Committee plans to complete the works in these urban spaces in the first quarter of this year. “Then it will remain pending what type of buildings will be allowed there, but that remains in the hands of the municipalities,” says Herrera.

Amounts of works In yesterday’s edition, the subtitle of the report ‘Shadows that shake the reconstruction’ states that they are $ 4,552 million in works completed and in execution, when the correct figure is $ 1,845 million, corresponding to 1,176 projects of those two items, as required in the main text and the infographic. (I)