Recovery of bodies is the priority of Ecuador and Colombia 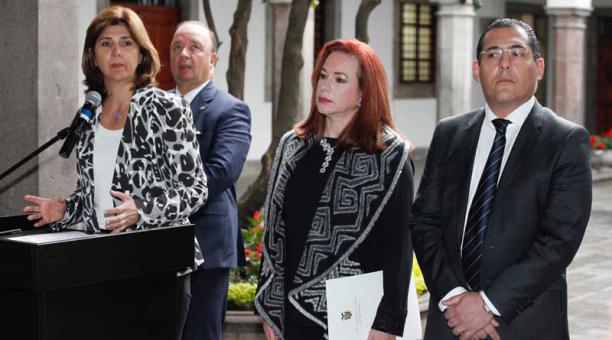 The priority of Ecuador and Colombia is the recovery of the bodies, but also the arrest of the person in charge of the so-called dissident front Óliver Sinisterra. This was stated on Monday, April 16, 2018, the Ministers of Defense and Foreign Affairs of both nations, who met in Quito.

Patricio Zambrano, from Ecuador, and Luis Carlos Villegas, from Colombia, supported the Red Cross in this task. “We speak through the International Red Cross and we will shore up all the work they do (in this sense). We do not want to interfere with your work. The two countries are going to maintain support for the institution, “said Minister Zambrano.

Villegas, however, informed that Colombia will continue cooperating with the recovery of the corpses. “It is an inalienable right of their relatives. The ICRC will tell us when and where they will have the location coordinates of these bodies and what the Colombian or Ecuadorian Government requires in order for their operation to be successful and expeditious.

The coordinate or locationare a primary requirement, “Villegas said. Before these pronouncements, the International Committee of the Red Cross (ICRC) ‘took note’ of a new communiqué that would be from the Oliver Sinisterra Front, announcing the suspension of the delivery of the three bodies.

“The ICRC has taken note of the Front’s position, expressed in a statement made public today (April 16), but remains alert to a possible evolution of the situation,” the international organization said in a bulletin released yesterday in Bogota.

In its statement, the dissident front justified its decision not to deliver the remains due to the lack of security guarantees. “We have taken the unanimous decision to suspend any type of humanitarian activity in relation to the delivery of the bodies of journalists,” it was reported.

The ICRC insisted on its predisposition to facilitate the recovery of the bodies “as long as there is an agreement between the parties and the necessary security conditions are met in the field”. In a statement, the United Nations urged “that all necessary actions be taken for the rapid and unconditional delivery of the mortal remains of the journalistic team, as a gesture of compassion and respect for families.” He also said: “These three information professionals were parents, children and spouses. The current priority is to alleviate the suffering of family and loved ones.”

President Lenin Moreno, who was in Manabí on Monday, also spoke on the subject. “What should we do as a nation of peace? Fight, fight hard by all means and with all our ability to defeat and capture the person responsible for this tragedy, the drug trafficker alias ‘Guacho’. The ministers in charge of this process have a period of 10 days to fulfill it. Rest assured that we will achieve it! “Said the President.

While this was happening in Quito, in Guayaquil and in Latacunga, the authorities presented the detainees, who would be part of the dissident group. In the Main Port were arrested 11 arrested, who are in the “high security” area of the local jail. Among them are a supposed expert in explosives, a person who would be linked to the family of the dissident and who gave him security, an informant, among others.

Gina Godoy, zonal coordinator of the Ministry of Justice, said that the intention of this presentation is to show that the management that is followed in this case is public. In addition, it was explained that each one is confined in individual cells and that the appearances will be made through videoconference.

In contrast, in Latacunga, the detainees are held in four pavilions and are being investigated for alleged terrorism, arms trafficking, death with explosives, among others. The suspects arrived at the Latacunga prison on February 20 and March 17.

The mayor of San Lorenzo, Gustavo Samaniego, said on April 16 that 151 people from Mataje left on Sunday in chivas and vans and took refuge in the canton of San Lorenzo. These are families who moved because of fear of violent actions and military operations in the border area with Colombia.

According to Samaniego, the displaced were temporarily housed in the Church. Between the families 87 children and adolescents are counted, who abandoned their homes only with suitcases full of food and clothing. The Emergency Operations Committee of Esmeraldas gave them victuals.

According to the Mayor, 700 people live in the center of Mataje, but there are also small enclosures around it. The Fire Department indicated that those affected received food, clothing, sheets and mattresses.

A similar displacement occurred in February in the town of El Pan, where one of the attacks of the illegals took place. The last remaining inhabitants of that community left their homes on February 21.

The attack on the San Lorenzo police station occurred on January 27. Then there were reported attacks to military patrols in El Pan and Alto Tambo. The kidnap of the EL COMERCIO team occurred on March 26, in the town of Mataje. (I)

What are the secrets of the success of cocoa in Ecuador?