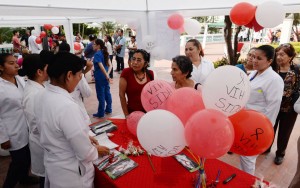 A giant red ribbon covered yesterday one of the buildings of the infectious diseases hospital Jose Daniel Rodriguez Mariduena, located in the Julian Coronel and Jose Mascote streets. This was to remember the Day of the Fight against HIV-AIDS, which is commemorated every December 1.

There, an open house about how the disease is transmitted, how to detect it and what treatments every infected person should have, was organized. HIV tests were made to the attendees and necessary care young person should have to avoid infection was detailed.

In other medical centers like the Luis Vernaza Hospital an open house and HIV tests were also conducted. There, from 08:00 to 10:00, 80 tests had been made, and they expected to make about 180 tests until 12:00.

In Ecuador 33,000 people were living with HIV in 2014, according to estimates by the UNAIDS

Delay in vaccination against FMD: Livestock