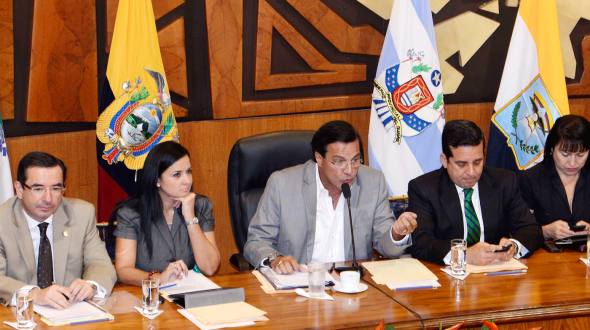 A possible time extension to solve the border conflicts through a legal reform confronts Assemblymen positions between Alianza PAIS (AP) of Guayas and other provinces.

“We will not yield, we will not succumb to a different kind of interest that may arise, the Prefect Jairala has already had a year to call a referendum …he has yet another year. If it is to an extension of the time limits of the law, this is not the position shared by Assemblymen from other provinces, who not only know too how to defend our province accordingly, but to our country too,” said Rosana Alvarado (AP Azuay), First Vice President of the Assembly, along with other Legislators from Azuay, Cañar and Pichincha, who opposed to the draft Law of Internal Limits in a press conference.

The Law limits approved in April 2013, provided for a period of two years (until April 2015), so that limits disputes are resolved with mechanisms ranging from the dialogue until the popular consultation.

It also states that they fail to comply with the deadline for settling disputes, it could be cause of a process of revocation of the mandate for mayors or prefects, she reminded.