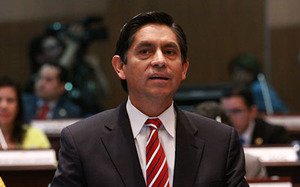 Changes in the definition of crimes of manslaughter, professional malpractice injury, is being negotiated between the doctors and the Executive, within the block Alianza PAIS (AP) and analyzed to do the same with environmental crimes and transit.

At the beginning of the meeting, in which 100 members of the regime had analyzed all the articles of each book of the new Code of Criminal Integral (COIP), Fausto Cayambe, the block coordinator, Nancy Morocho and Pamela Falconi explained the changes in the environment and traffic.

Cayambe maintains that it is important to regulate it harshly as traffic offenses is a major cause of death in the country, but adds that it must be balanced as there are penalties of fine, imprisonment, removal of points and others.

Falconi’s position remains in reviewing a new proposal from the Assembly of AP, which is part of the leadership of transportation: Jose Zapata and Alberto Arias.

On environmental issues, Morocho indicated that a group of Assembly members asked for the reinstatement of the crimes for contamination of soil, water and ecosystems, that were eliminated in the second debate.

A part of AP Assemblymen seeks that some criminal sanctions against juvenile offenders be more flexible and also has the intention that the workshop successfully reduces penalties for that sector and increase the minimum age.

Mauro Andino, the chairman of the Judiciary Committee, said that at this time the decision to accept or not the new proposals falls on him.