Relatives of the 21 detainees agreed to meet on December 18 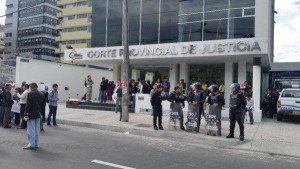 Relatives and friends of the 21 arrested people during the protests against the constitutional amendments, on 3 December, gathered Thursday afternoon at El Arbolito Park in the north of Quito.

The purpose of the meeting was to define further actions following the decision of the Labour Chamber of the Court of Justice of Pichincha of denying the writ of habeas corpus.

Relatives of the detainees discussed the possibility that after they meet 15 days in prison, they are greeted with a special ceremony next week, in the same park, the place where they were captured.

They agreed to meet next Friday, December 18th, in the morning, in the Flagrancy Unit to obtain release orders.

It was further proposed to hold a vigil in the detention centers where the 21 prisoners are.

The vigil will take place this Saturday in Chillogallo, south of the city, in the Reception Centre where the only woman detained is serving her sentence; and Wednesday, in El Inca Provisional Detention Center, in the north of the city.