Report confirms the transfer of Teaching Staff Funds to the Biess 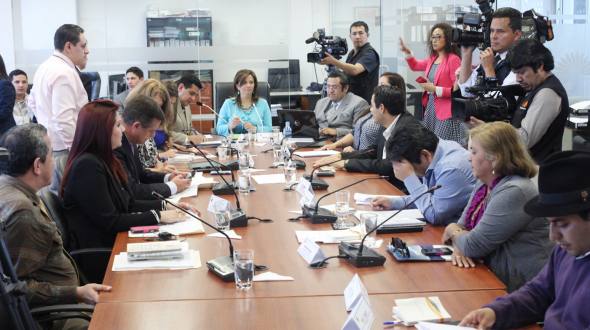 Members of Alianza País (AP) in the Commission on the Rights of Workers of the National Assembly, yesterday voted for the first debate report of a draft law which seeks to transfer to the Bank of the Ecuadorian Institute of Social Security (Biess) the administration of closed pension funds, which in its origin or under any modality have received state support.

The Commission report lists 54 funds that would enter into this new regulation under the project entitled “Amending Law to the Social Security Law and the Law of Biess for the administration of the Complementary Funds “, which was originated froman initiative of Hólger Chávez (AP).

Betty Carrillo, President of the Commission, and Fausto Cayambe, official member, promoted the idea that the Severance Fund of the Teaching Staff itself is part of the funds that have received state resources.

Cayambe added that from this additional severance funds, the 2% is from teachers contributions and 1% is from employerscontribution ; ie state.

After a dozen changes of form, eight AP Assembly members voted in favor of the report. Meanwhile, Andrés Páez (CREO) and Cristina Reyes (PSC-MG), who proposed the file, voted against it.

Change of gas cookers by electric begins this August 1st