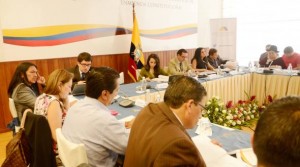 With eight votes of Alianza País and its allies the report was approved yesterday for the first debate of the Request for Constitutional Amendments, which contains 16 changes.

The paper extends around three themes: indefinite reelection for all elected authorities, regulation of the workers by the Organic Law on Public Service and not by the Labour Code and the withdrawal on the audits capacity of the Comptroller’s office.

The issue of the reelection is treated on four areas: electoral suffrage, popular sovereignty and alternation system.

For the regulation of public workers, it divides the analysis in the principle of equality, comparative advantage between the Public Service Act and the Labour Code and the guarantee of rights to association.

Patricio Donoso (CREO) referred to the analysis of minority, which recommends refraining from processing the amendment. Among the changes, Fausto Cayambe (AP) also asked that to include something regarding the abolition of limits of regions, to improve the wording in the arguments on public workers and the Comptroller, among others.

The report for first debate would be addressed in the plenary Assembly on Monday and its treatment would be extended until Tuesday.