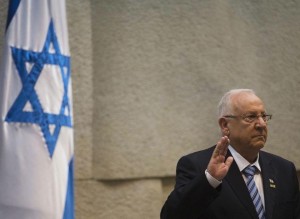 Reuven Rivlin, 74, and right nationalist politician, has become this Thursday the tenth President of Israel, after assuming office in an investiture ceremony held in the Parliament before the highest authorities of the country.

“New Kippah on the  head of the new President,” said Rivlin, while he took from his pocket a skullcap, after swearing his charge with a broken voice on a Hebrew Bible with the right hand raised and finally taking office as the Chief of the Israeli state.

The event was attended by the highest authorities and representatives from areas such as cultural, economic, religious leaders of the country and security forces, along with family and friends of Rivlin.

Rivlin was elected on June, 10 in a hotly contested vote in the Knesset, and will replace Shimon Peres after seven years at the helm of Israel.