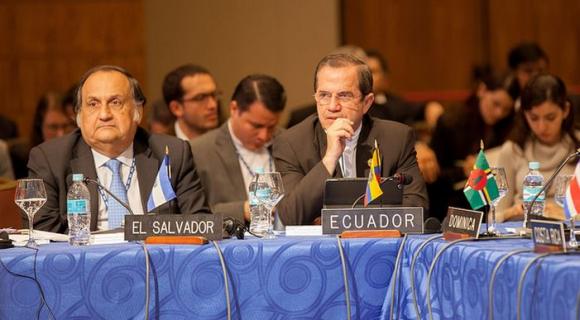 One day after the close of the General Assembly of the Organization of American States (OAS) in Asuncion (Paraguay), Ecuador’s Foreign Minister Ricardo Patiño regretted that the decisions of the member countries are “shy and insufficient”, regarding the change of venue of the Inter-American Commission on Human Raise (IACHR), and the review of its rapporteurs operations.

On this subject, the Secretary General of the OAS, José Miguel Insulza, responded: “When I leave office they may change the seat of the IACHR and destroy the system of human rights”.

The Ecuadorian government promotes the U.S. capital output of the Commission, for which he proposed a draft resolution to the Assembly of the International Organisation for  its discussion, but did not get the support of the member states. The regime admitted at the end of the regional conference so far there are no conditions to solve it, for that they will have to wait for  the next meeting, scheduled for April 2015.