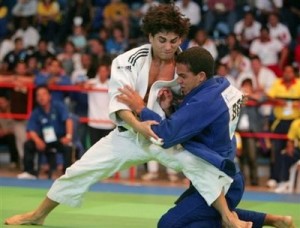 Roberto Ibañez name is associated with the judo fighting style nationally and internationally. Ibañez was born in Guayaquil, Ecuador. At a very young age he started to train the judo as a martial discipline, because his father and uncles shared it as family tradition. When Roberto was 10, he and his brother, of seven, began their apprenticeship at Fundación Centro Civico. They have not stopped training ever since. Ibañez reflects on how the judo besides being an important part of his life, it also has become his job.

Now that he is an elite judoka, Roberto trains to reach a superior level, after winning the Gold Medal of the World Cup of Bello Horizonte in Rio de Janeiro. However, after his participation on the 2008 Beijing Olympic games, he focused on training the next generations of children in judo and working on the growth of his academy.

Roberto has fought in so many tournaments, that he has lost the count. However, he has participated in many more international championships. Roberto considers the idea of participating in the London Olympic Games of 2012, however his main focus is his students and its academy. He plans to open a few branches and go from there. The former champion began training Brazilian jiu-jitsu, “it is a more flexible martial discipline regarding the elite competitions, and basically that’s were I am now,” added Ibañez.

As a husband, and father of two, he distributes his time taking care of them, and his job as a judo trainer. This does not allow him the chance of a regular training; however, Roberto will participate in the next international judo competitions.